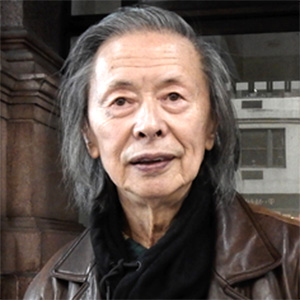 Huang Xiang is a noted writer and poet and a Hunan native. His literary debut was in 1958 with the publication of his poetry in various Guizhou Province literary journals while he was still a worker at the Guiyang Hardware Factory. Huang stopped going to work in 1959 and went on a journey to see Qinghai Lake and Qaidam Basin. He was arrested by the authorities and returned to Guiyang, where he was sentenced to four years of “reeducation through labor” on the premise that he had been trying to cross the border and defect to another country. Upon the completion of his sentence, he was sent to Meitan County of Guizhou Province to work as an agricultural laborer on a tea farm.

The authorities arrested Huang again in 1966 and sentenced him to another three years of reeducation through labor. In 1968, he was rehabilitated and sent to work in a Guiyang textile factory. Less than two years later, in 1970, Huang was arrested for a third time during the “One Strike Three Antis” campaign on the charge of being an active counterrevolutionary and sent to a detention camp.

In 1978, Huang took a leading role in what would later become known as the Democracy Wall movement. In October, he and his friends created and distributed the journal Enlightenment that called for democracy and political reform. A month later, in November, they formed “The Enlightenment Society” in Tiananmen Square to advance these aims. When the Democracy Wall movement was suppressed in 1979, Huang was arrested yet again and detained at a facility in Guiyang.

In November 1986, Huang organized a poetry shouting recitation event called the “Poetry Big Bang” organized by several institutions of higher learning, including Peking University. Following the nationwide student demonstrations that took place in December 1986, Huang was one of those targeted in a crackdown on perceived instigators. He was arrested at his home in Guiyang in October 1987 and, in May 1988, charged with “disrupting social harmony” and sentenced to three years in prison. He served this sentence at the Wangwu Labor Reform Division in the suburbs of Guiyang.

After he was released from prison in October 1990, Huang continued to write. In 1993, he won an award for his continued defense of free speech from the Human Rights Watch and was invited to visit the United States. Upon his return to China, Huang was arrested in Beijing in 1994 and detained on the outskirts of Beijing. He went into exile in the United States in 1997.