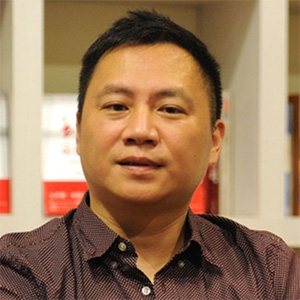 Wang Dan, born in Beijing, was a history student at Peking University. He hosted the "Democracy Salon" at the school, edited student publications, and engaged in the campus democracy movement. In the May 1989 Tiananmen Square Protests, Wang was one of the student leaders and co-sponsored a student hunger strike. After the massacre on May 4, he became public enemy number one on the government’s wanted list for students. Wang went into hiding for a short time before returning to Beijing in July, where the authorities discovered and arrested him. He was held in Qincheng Prison while awaiting trial. In 1991, Wang was sentenced to four years in prison on the charge of producing counterrevolutionary propaganda and incitement.

Upon his release in February 1993, Wang continued to engage with political opposition movements in China, launched a public petition campaign, and served as a director of the New York-based China Human Rights Organization. As a result, he was arrested again in May 1995. In October 1996, the authorities sentenced Wang to 11 years in prison for “incitement to subvert state power.” He served this sentence in Liaoning Province’s Jinzhou Prison.

On the eve of President Clinton's visit to China in April 1998, the Chinese Communist Party deported Wang to the United States citing “humanitarian considerations.” He received his PhD in History and East Asian Linguistics from Harvard in 2008 and continues to fight for democracy and human rights to this very day.