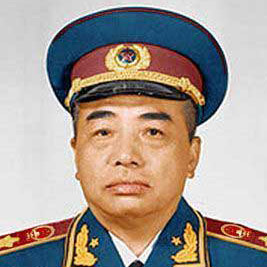 Date(s) of Arrest:
December 5, 1966
Prison Terms:
illegally incarcerated by the CCP in 1966 until his death in prison on November 29, 1974
Charges:
Organizing anti-party groups, “Right opportunism,” conspiring with foreign countries
Crime:
Offending Mao Zedong by criticizing the Great Leap Forward during the Lushan Conference in 1959

Peng Dehuai was one of the famous Ten Marshals and the Defense Minister of the People’s Republic of China. In July 1959, during an expanded session of the Politburo of the CCP Central Committee, Peng wrote a private letter to Mao Zedong criticizing elements of the Great Leap Forward and the system of people’s communes. He was repudiated for that, labeled as the leader of a “right opportunist anti-party group,” and fired from his post as Defense Minister.

In September 1965, Peng was ordered by Mao to serve an official post in Sichuan. On December 5, 1966, at the direction of the Central Cultural Revolution Group, a unit of Beijing Red Guards abducted Peng and brought him back to Beijing by train. He was subject to indefinite, illegal imprisonment and torture until his death eight years later in 1974. In December 1978, the Third Plenary Session of the Eleventh Central Committee of the Communist Party of China posthumously rehabilitated Peng and restored his reputation.