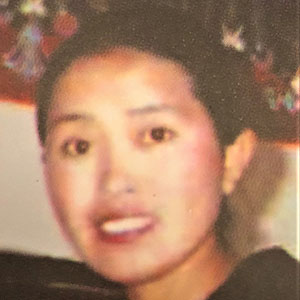 Ghang Lhamo, a Tibetan, enrolled in the Tibetan language department in the University of Tibet in 1987. In 1989, she was secretly kidnapped by the authorities after her participation in a peaceful march in solidarity with students in the Beijing Democracy Movement as well as in her distribution of leaflets about the Dalai Lama on campus.

She was sent to "re-education through labor" for three years for "inciting the public with demagoguery." In truth, she was imprisoned in the fourth prison of the Tibet Autonomous Region located on the outskirts of Lhasa.

After her release, Ghang’s status as a former political prisoner precluded her from any employment opportunities.

In 2002, she fled to Nepal on foot with a group of Tibetans before joining the Tibetan Government-in-exile in India.

In 2009, the Laogai Research Foundation translated Ghang’s book A Drop of Snow Water in the Exposed Sun into Chinese, Tear Drops from the Land of Snow for publication.