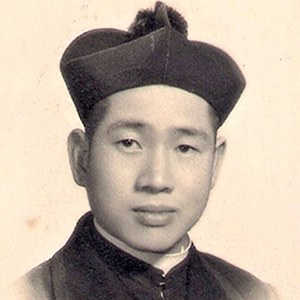 Zhu Weifang, born in Yongjia County in Zhejiang Province, entered the Xujiahui Monastery in Shanghai in 1952. He was ordained at the St. Ignatius Cathedral in October 1954, and he became a priest at the Qianku Catholic Church of Pingyang in the diocese of Wenzhou in July 1955.

In November 1955, only 4 months after having taken up his post, Zhu was arrested and sentenced to 15 years in prison. He was released in March 1971 and returned to his hometown in Yongjia County. However, even after his release, he was proscribed as a counterrevolutionary and under constant surveillance.

Zhu was arrested again on Easter in 1982 and sentenced to seven years in prison. He was released on parole in July 1988, nine months in advance of the completion of his sentence. In 2007, Zhu was appointed by the Vatican to be the bishop of the diocese of Wenzhou.