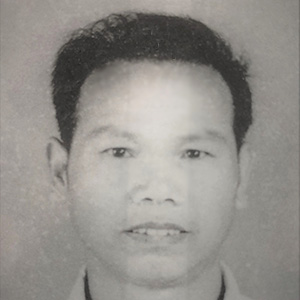 Date(s) of Arrest:
May 1967
Prison Terms:
7 years
Charges:
Counterrevolutionary
Crime:
Writing a letter intended for the government of Taiwan and forwarding that letter through a relative in Hong Kong

Zeng Shirong grew up in a village in Lianping County, Guangdong Province. He graduated in July 1964 from Guangdong Normal College. Immediately after he returned to his hometown to work, he was falsely accused by the other villagers of "sympathizing with rich peasant families." He was fired from work and sent back to his village. He wandered to Xinfeng County, Jiangxi Province, and made a living performing odd jobs.

After listening to the radio broadcasts from Taiwan's Voice of Free China, Zeng and three fellow young workers also from his hometown wrote to a relative in Hong Kong in March 1967 asking him to pass their letter to Chiang Kai-shek, Chairman of Kuomintang and the president of the Republic of China. They were all arrested in May and sent back to Lianping County.

Zeng Shirong was sentenced to seven years in prison. In April 1968, he was sent to a Laogai farm in Yingde County for rice and tea production and imprisoned there until 1974.

His memoir about his life in the Laogai, In the Red Ocean I Remember, was published by the Laogai Research Foundation in 2006.

【E-Book】 In the Red Ocean I Remember（Chinese）