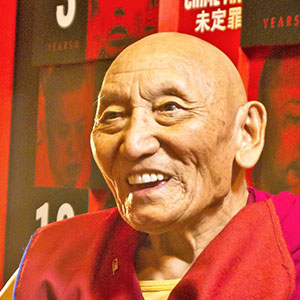 From the Chinese Army's first encroachment into Tibet, the Tibetan monk Gyatso fought tirelessly for Tibetan rights and autonomy. Imprisoned several times, he escaped once in 1962. In the early 1980s, he snuck out of his forced job placement assignment under cover of night to post pro-independence posters in Lhasa.

Gyatso finally left Tibet for Nepal after his release in 1992, detailing the horrors of the Laogai to the international community. Gyatso has since displayed the collection of torture instruments he smuggled out of prison and testified before the UN Commission on Human Rights and the U.S. House International Relations Committee.