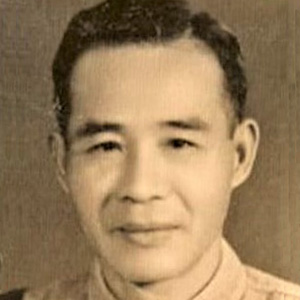 A Long was the pen name of the writer Chen Shoumei. He was a native of Hangzhou, Zhejiang province. In 1955, he was the director of the Editorial Department of Tianjin Cultural Association.

In his early years, A Long studied at the Shanghai University of Technology. He later entered the Huangpu Military Academy. At the beginning of the Second Sino-Japanese War, A Long served as an artillery officer and participated in the Battle of Songhu near Shanghai in the autumn of 1937.

A Long met Hu Feng in Wuhan in July 1938, and he was introduced by Hu to the secretary of CCP leader Zhou Enlai. In 1939, A Long arrived at the CCP’s then-capital of Yan’an. In 1941, the CCP dispatched him to Chongqing, the wartime capital of the Republic of China during the Second Sino-Japanese War, as an underground agent. He graduated from the Nationalist Party Army University and became an instructor there following his graduation. From that point forward, he used his position to obtain military intelligence and transfer it to the CCP.

A few years after the Communist takeover of China, A Long was arrested on May 28, 1955 during the CCP’s campaign to “Eliminate the Hu Feng counterrevolutionary clique.”

A Long was held for almost 10 years before he was given a brief trial in 1965, in which he was denounced by the authorities of Tianjin City as a “core member of the Hu Feng counterrevolutionary clique,” “secret agent of the Nationalist Party,” and “reactionary army officer.”

In June 1965, A Long wrote from prison in a letter to the judge, “This case about the Hu Feng counterrevolutionary clique is entirely artificial, fictitious, and fabricated! You are deceiving not just the party but the entirety of the country!”

In March 1967, two months short of his 12th year of imprisonment, A Long died in prison.