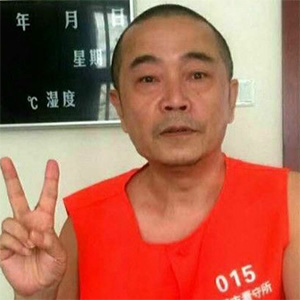 Huang Qi, a native of Sichuan, created the website “June Fourth Sky Network” in 1999 in memory of the Tiananmen Massacre of 1989. On June 3, 2000, one day before the 11th anniversary of the massacre, Huang was arrested and sentenced to five years in prison on the charge of subversion of state power.

Following his release from prison on December 31, 2006, Huang rebuilt the June Fourth Sky Network as the “China Sky Network Human Rights Center.” He actively participated in disaster relief activities and helped the parents of the thousands of students who had died in the May 2008 Wenchuan earthquake. In the articles he wrote afterwards, he exposed that the reason for the disproportionately high number of collapsing schools during the earthquake was due to their substandard construction quality and said that the government should be held accountable for this.

On the evening of June 10, Huang was secretly arrested. He was sentenced in November 2009 to 3 years in prison for illegal possession of state secrets.

In November 2016, Huang was arrested yet again at his home. In January 2019, he was charged with unauthorized disclosure of state secrets and spreading state secrets abroad, for which the authorities sentenced him to 12 years in prison on July 29.