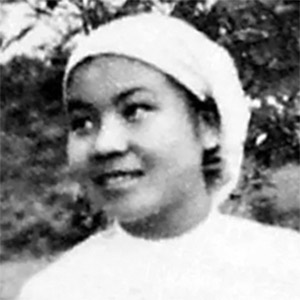 Guan Minghua, a native of Shixing County, Guangdong Province, was a female doctor working at the 4th Division, 8th Regiment hospital of the Guangdong Production and Construction Corps. In late 1969, she was charged with “criticizing the new revolutionary committee” and was detained for investigation. The casual mention of a “golden sun” in Guan’s diary was cited as evidence of her antipathy towards Chairman Mao, because Mao was “the reddest of red suns.”

In June 1970, during her detention, Guan wrote articles that said that Lin Biao, then Vice-Chairman of the CCP, was “a wolf wearing the skin of a sheep” and “a time bomb buried next to Chairman Mao.” For these remarks, she was labeled as an active counterrevolutionary and sentenced to death.

On March 12, 1971, Guan was brought to a mass public trial. To prevent her from being able to show defiance, her jailers had gagged and bridled her. At the end of the public trial, Guan, who had been on a hunger strike for several days, was dragged to a nearby hillside and shot dead.

In January 1979, the Guandong Provincial Committee of the CCP posthumously rehabilitated Guan Minghua and declared her a “revolutionary martyr.”